The leadership of Vicksburg needed to rebuild the village’s trust in its government. Significant trust had been lost due to economic hardship and financial scandal in the prior two decades.

Vicksburg is a small community of just over 3,000 people located in Kalamazoo County, MI, about halfway between Detroit and Chicago. The community experienced a historic economic downturn at the turn of the millennium, when the paper mill that had been the village’s economic engine for nearly a century closed its doors for good. Unsurprisingly, Vicksburg’s residential community shrank dramatically in the wake of the closing.

Ten years later, local confidence in the government took a second big hit when the village manager at the time was removed for financial malfeasance. When Jim Mallery took over as Village Manager in 2016, the village still had serious trust issues to address. The community had lost its faith in the village government years earlier. By 2016, distrust in the government had become an entrenched part of the village’s culture.

But this is a story about good things happening. Today, the village of Vicksburg is making great progress toward getting back on track. A $90 million redevelopment project is underway at the mill. Lots of young families have moved in. New parks and tournament-level recreational amenities have been established. Vicksburg has become a thriving bedroom community for the cities of Portage and Kalamazoo. Slowly but surely, residents’ trust in their government is on the rise as well. And ClearGov has played a big part in the return of the community’s trust.

When he became Village Manager in 2016, Jim Mallery knew that the key to rebuilding trust would be “to operate with complete and total transparency,” especially regarding Vicksburg’s finances. He spent the first few years of his tenure rebuilding financial systems and processes, slowly getting citizens involved. Then, in 2019 Mallery turned to ClearGov to help make his vision of total financial transparency a reality. “We want to be a model government for transparency,” was his simple directive.

Working from a simple ERP data export, ClearGov’s team got Vicksburg’s new financial transparency center up and running quickly. The village started promoting it aggressively. “Go to our transparency site on ClearGov,” Mallery tells residents. “Ask us a question about anything you see.” That’s a big promise when you’ve made every last detail of your finances easy for residents to understand.

But for Mallery and the village of Vicksburg, it’s really paid off. Trust is on the rise, and “public response has been phenomenal,” according to Assistant Village Manager Alex Lee. The “difficult” emails have dried up, reports Mallery, and face-to-face they’re hearing “[The transparency site] is great, I can understand it, I can navigate.”

Mallery says he especially appreciates that ClearGov is so readily accessible to smaller communities like Vicksburg. “ClearGov’s affordability makes it easy to think of it as an investment rather than an expense,” he says. And the Village Council agrees: Mallery reports unanimous enthusiasm for ClearGov from council members. 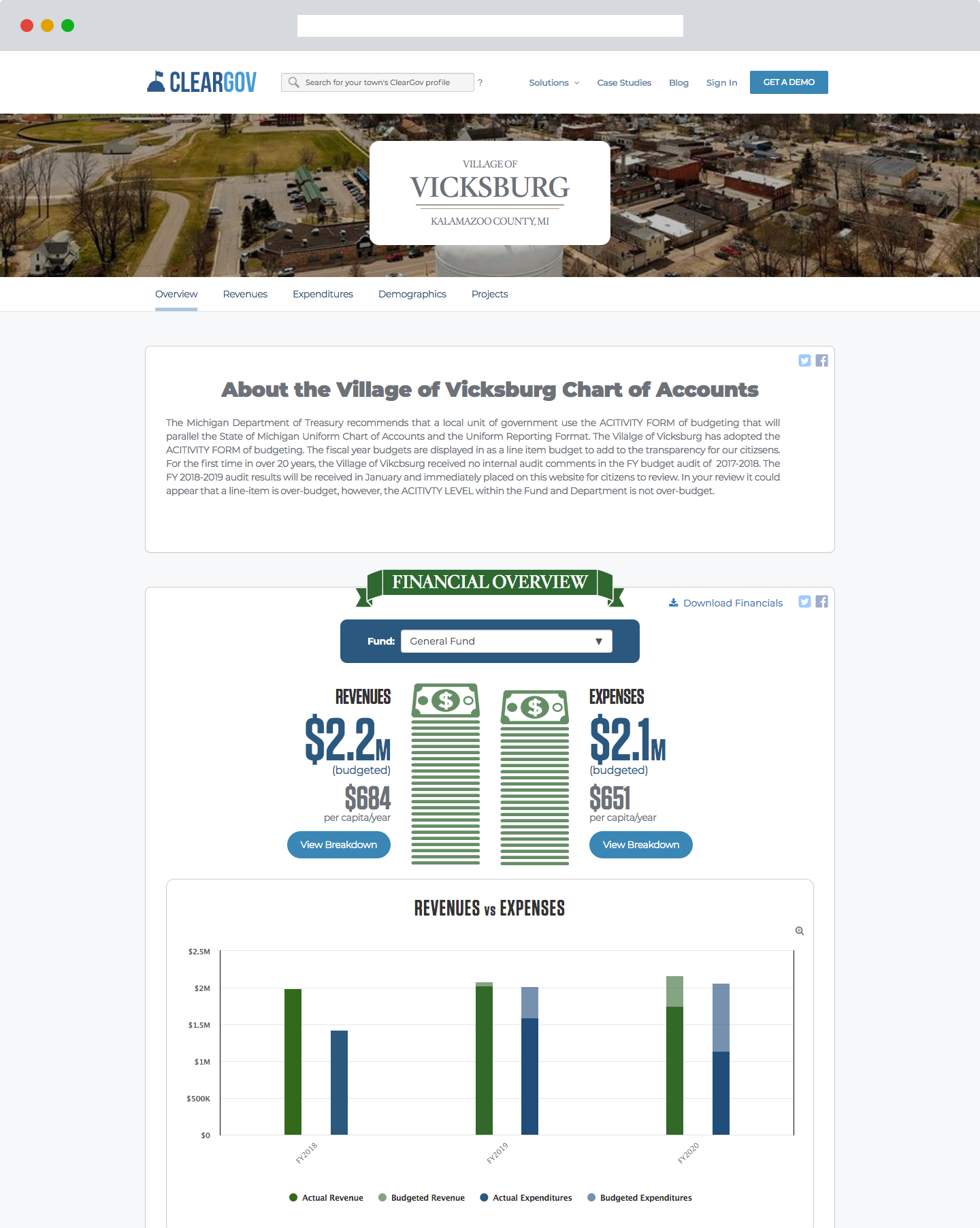 Recently, the village of Vicksburg has expanded its use of ClearGov to include our capital projects and department dashboards modules as well. A move to Open Checkbook is next.

Over time, Vicksburg’s ClearGov profile has become a critical lever in the village government’s efforts to regain the trust of its community. So would he recommend ClearGov to peers in other governments? “Without hesitation, yes,” says Mallery. “You help me provide the concise and vital financial information people want, in a way that’s easy for them to understand. I’d tell my peers, ‘The question isn’t can you afford it? It’s how can you not afford it?’”

Check out ClearGov’s groundbreaking new Digital Budget Book software. Get ready to save a ton of time and money on this year’s budget book. You’ll end up with a better budget book to boot.

Get a Digital Budget Book Demo

ClearGov is committed to the success of every local government. We provide secure, cloud-based software for efficient, collaborative budgeting; fast high-quality budget book production; and easy-to-understand citizen communications. Our solutions increase a government's financial efficiency and help build community support. ClearGov software is easy to afford, easy to implement, and easy to use, for any local government, of any size.