“It’s our job to communicate our budget — the what and the why — in a way that isn’t confusing or overwhelming. We want to proactively engage citizens because what we’re doing directly affects them. ClearGov gives us an effective and visually compelling way to do that.”
Jay-Michael Baker – Community Engagement Manager

Pueblo West needed to communicate the complex budget items unique to a Special District in a format residents could easily access and understand.

Founded in 1969, the Metropolitan District of Pueblo West is just 50 years young. And, while it’s still considered a small town in many respects, the District is the fastest growing community in Southern Colorado. Pueblo West operates one of the leanest local governments in the State and provides robust services to over 30,000 residents spread across a 49-square mile rural and urban area.

Despite a population on the rise, District officials began noticing a decline in attendance at public meetings. Eager to keep their growing community engaged and involved, the Board sought new ways to communicate with busy residents who may not have time for meetings, but still have a vested interest in how the District is run.

Pueblo West is a what’s known as a Special District, a quasi-municipal political subdivision that shares many of the same powers as a traditional Colorado municipality, but funds community services in different ways. For example, the District does not receive sales tax revenue. Sales tax collected within Pueblo West goes to Pueblo County and the State. Being able to convey important fiscal data like this to the public in an accessible and easy-to-understand format can be a challenge, especially if residents can’t connect in person to get their questions answered.

District leadership believes that by engaging and collaborating with residents, they can better match available resources with community demands. Pueblo West surveys their community annually to gauge priorities and they recently launched a Financial Transparency Center, powered by ClearGov.

They promote the Transparency Center on their website, in their annual report, and on social media to drive interested citizens to the interactive, infographic-based portal where they can explore five years of revenue and expenditure data for the District. Community engagement manager Jay-Michael Baker says, “With ClearGov, Pueblo West citizens get a clear picture of the District’s finances, including changes or additions for the upcoming budgeting cycle.” 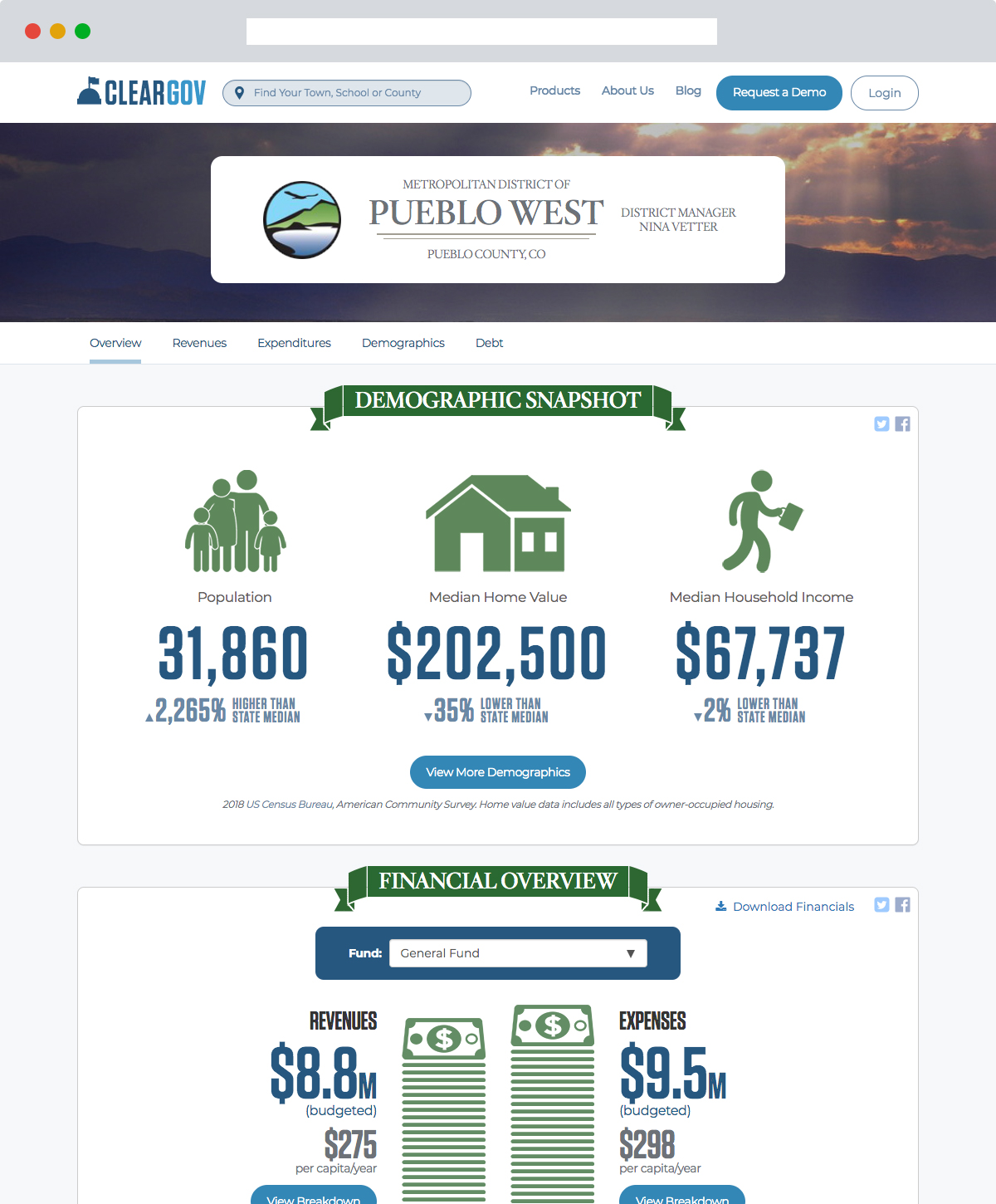 Baker says ClearGov allows residents to take a deeper dive into the fiscal data to view some of those smaller line items unique to special districts. “This gives citizens a more wellrounded understanding of Pueblo West’s budget,” he explains.

Baker says the Board uses ClearGov’s dynamic charts internally as well, especially during budget season. “It’s particularly helpful during meetings to be able to quickly drill down into our finances and visualize the impact of proposed changes over time.”

“Before we had ClearGov, residents who wanted to learn more about how their tax dollars were being spent had to attend a public meeting. Now, we just post our financials right to our Transparency Center in real time, removing the burden of attendance. Residents no longer have to be present to be informed.”
Jay-Michael Baker – Community Engagement Manager