Once every couple of months, we pry a coworker away from their computer (or in this case, headset) and interview them for the ClearGov blog. It’s our way of introducing clients and prospects to the people behind the platform. This quarter, we’re featuring my colleague and fellow “ClearGovernor” Ryan.

Ryan is smart, personable, super focused, and a quick study, He’s the kind of person that could strike up a conversation with a stranger in a coffee shop and end up managing the guy’s campaign for County Judge — and winning! We’ll get to that. Read on.

1. What do you do at ClearGov?

In his brief tenure at ClearGov, Ryan has quickly risen through the ranks from SDR superstar to accomplished AE. When asked to describe his role, Ryan speaks passionately about the information gap between governments and the communities they serve and using technology to bridge the divide.

He’s got real boots-on-the-ground experience in both community service and local government, so he knows firsthand some of the challenges civic leaders face and he’s genuinely excited to be in a position to help.

I sit across from Ryan and I occasionally overhear conversations (it’s a small office, don’t judge me). He once conceded to a prospect — rather convincingly — that although he could sometimes be perceived as “annoying” his “persistence was just one of the many endearing reasons his fiancée had agreed to marry him.” He got the demo — and the girl. Enough said.

2. What do you know about the public sector?

Originally from Memphis Tennessee, Ryan spent his formative college years in Waxahachie, Texas (“spelled just like it sounds,” he insisted) where he attended Southwestern Assemblies of God University (SAGU). There, he found his calling, met the best friend he’d later marry, and honed the community outreach and interpersonal skills that make him such a valuable member of the ClearGov team today.

At SAGU, Ryan interned with The Waxahachie Project, a non-profit organization based in Ellis County that unites community leaders, business execs, non-profits, churches, and educational institutions to work toward common goals. As a marketing communications intern, Ryan led a citywide networking initiative to recruit and train 225+ college students to canvas the city. Under his direction, they conducted surveys, interviews, and focus groups with community leaders and residents. It’s easy to see how the lessons learned from this kind of grass-roots organizational experience inform Ryan’s conversations today with mayors and town administrators.

Now, about that stranger in the coffee shop running for a County Judge seat. Ryan struck up a conversation, liked what he heard, and agreed to help with website design. One thing led to another and soon Ryan was acting as campaign manager for then-candidate (and now duly elected county administrator) Todd Little.

Little successfully unseated a 10-year incumbent in a competitive county-wide Primary and Primary Runoff, overcoming an 11-point deficit to win the latter by 38 percent. He went on to win the General Election with a staggering 70% of the vote. Never underestimate the power of a chance encounter and a caffeinated beverage.

3. Let’s play bad news, good news. Bad: You’re stranded on a deserted island.
Good: You get to bring one album with you. What do you take?

Without hesitation, Ryan emphatically responds, “The 20/20 Experience by Justin Timberlake.” Timberlake (AKA JT) said the album title is a reference to perfect vision and that friends described it as “music you can see.” This just confirms what I said up front: Ryan is “super focused.” He adds that JT is ALSO a Memphis native, so they’re practically kin.

4. Deserted islands are notoriously challenging (especially for extroverts), so we’ll also let you bring a movie. What’s your go-to film and why?

“The Dark Knight, because Batman is awesome. And because there’s no better Joker than Heath Ledger.” He’s right of course, on both counts. Plus, you can’t argue with superheroes and psychopaths. I mean you can, but it probably won’t end well. 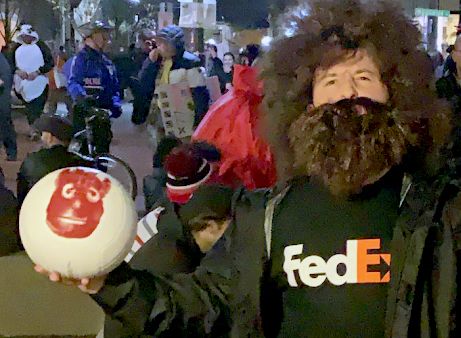 I usually ask this question first but forgot and had to email Ryan after the fact. It turns out he wanted to be “a famous actor.” This explains so much — especially Halloween.  Ryan came to work dressed as the character Chuck Noland from the movie Castaway. He actually stayed in character (and the wig) all day. I suspect he’s a method actor, further evidenced by the fact that he was so comfortable with the whole “deserted island” narrative above. Anyway, I wouldn’t be surprised if he were someday famous. Note to self: get him to autograph something now.

Annnnnd, that’s a wrap. Full disclosure, Ryan and I did not walk to get coffee like we were supposed to for this interview. It was a busy day and we ended up just hijacking a conference room for a few minutes and chatting between meetings. Given what I now know about his behavior at coffee shops, I think I may have dodged a bullet. No doubt he would have signed both of us up for some sort of potentially annoying/endearing campaign.

Excited to Build Your Next Budget?

You could be. Use ClearGov Budgets and your next budgeting cycle will be faster, smoother, and more collaborative than ever before. That’s plenty to get excited about!

Get a ClearGov Budgets Demo