October is National Disability Employment Awareness Month (NDEAM). As it happens, we’ve been wrapping up round #2 of behind-the-scenes updates to ClearGov.com in an effort to make the site more accessible to people with disabilities — and to ensure that the transparency profiles we host for local governments across the country meet the standards outlined in the Americans with Disabilities Act (ADA).

Making information accessible and easy to understand is core to ClearGov’s mission. Our infographic-based profiles are expressly designed to communicate complex fiscal data in a way that makes sense to everyone. So, when we learned that there were ways to code our site to improve accessibility to disabled populations, we eagerly sought the services of the professionals at Digital Authority Partners (DAP), a leader in ADA website compliance.

There are currently more than 54 million Americans with visual or hearing impairments, many of whom rely on assistive technology to access the Internet.  Furthermore, there are 77 million baby boomers in the U.S. — 10,000 of whom turn 65 each day. As this massive population ages, the demand for ADA-friendly online content will only rise. In fact, according to projections based on the most recent census data, the number of people with visual impairment or blindness in the U.S. is expected to double by 2050.

In the same way that we make buildings accessible to people in wheelchairs, it’s incumbent upon organizations in both the public and private sector to make websites accessible to users who rely on devices like screen readers and voice recognition software. It’s the right thing to do — and the sooner we all do it the better. That said, accessibility also happens to be the law.

State and local governments report an uptick in lawsuits

The number of website accessibility lawsuits filed under Title III of the ADA nearly tripled in 2018 — and litigation is on the rise. The Orlando Sentinel reports, “a flurry of lawsuits have been filed in federal courts contending that many of the public documents on government websites and businesses are not completely accessible to people who have problems seeing or hearing.”

With more than 2,000 suits filed in 2018 alone, municipal leaders and district administrators are increasingly under pressure to make their online content and services compliant with standards and guidelines for assistive technology. Overwhelmed at the prospect, some have taken to removing documents from their websites all together in an attempt to steer clear of violations while they research next steps. It’s unfortunate because, having made tremendous strides toward open data and transparency in recent years, the idea of local governments actually pulling content from websites represents a major setback. That’s another reason ClearGov wanted to fast track the optimization of our own website.

ClearGov partnered with DAP to improve accessibility for all

In August, DAP conducted a thorough audit of ClearGov.com and identified dozens of issues that needed to be addressed in order to optimize accessibility. Our site developers quickly went to work tackling each item on the prioritized checklist — one by one. We added alt tags to images, text labels to form fields, and addressed a host of other issues affecting literally thousands of pages on the site. While many of the items we fixed are invisible to the casual visitor, people using assistive devices and software will recognize the improvements immediately.

When we were done, we asked DAP to conduct a second audit to make sure that we had successfully resolved all the issues. It turns out we were close, but still had more I’s to dot and T’s to cross (at least figuratively) — and that’s what we’ve been laser focused on the last few weeks. Today, in the final days of NDEAM, we’re pleased to report that we’ve earned DAP’s seal of approval and cleargov.com is officially optimized for ADA compliance. 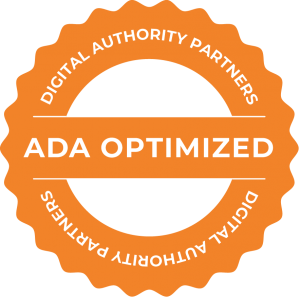 Because we host transparency profiles for more than 40,000 civic entities, it’s important that we get this right — for ourselves, our clients, and the residents they serve. It’s equally important that we maintain an ADA-friendly site as we continue to add new features and functionality over time. Our friends at DAP caution that optimization is not a one-and-done exercise but rather a continuous process, and ClearGov is committed to building increasingly frictionless experiences for site visitors.

What the DAP seal of approval means for ClearGov Users

ClearGov.com is now accessible to more residents than ever before. Plus, local governments who currently have an active transparency profile powered by ClearGov can rest assured that the financials, demographics, capital projects, and department metrics they display on our site are already optimized for ADA guidelines.

Of course, that doesn’t mean that their own municipal websites shouldn’t be audited for compliance. All online public documents and government websites need to be accessible to citizens with disabilities. If you’d like to learn more, ClearGov will be co-hosting a live webcast with Digital Authority Partners entitled, “Accessibility Matters: Making Your Municipal Website ADA-Friendly” on November 14th. We’ll talk about our own experience with optimization, explore some of the most common accessibility issues found on government sites, and detail best practices and next steps for meeting ADA guidelines. Register today for this free session.

Is Your Financial Data Clear to Residents?

Use ClearGov Insights and keep local residents in the loop with your whole story:
financials, capital projects, department-by-department performance.


Get a ClearGov Insights Demo

ClearGov is committed to the success of every local government. We provide secure, cloud-based software for efficient, collaborative budgeting; fast high-quality budget book production; and easy-to-understand citizen communications. Our solutions increase a government's financial efficiency and help build community support. ClearGov software is easy to afford, easy to implement, and easy to use, for any local government, of any size.